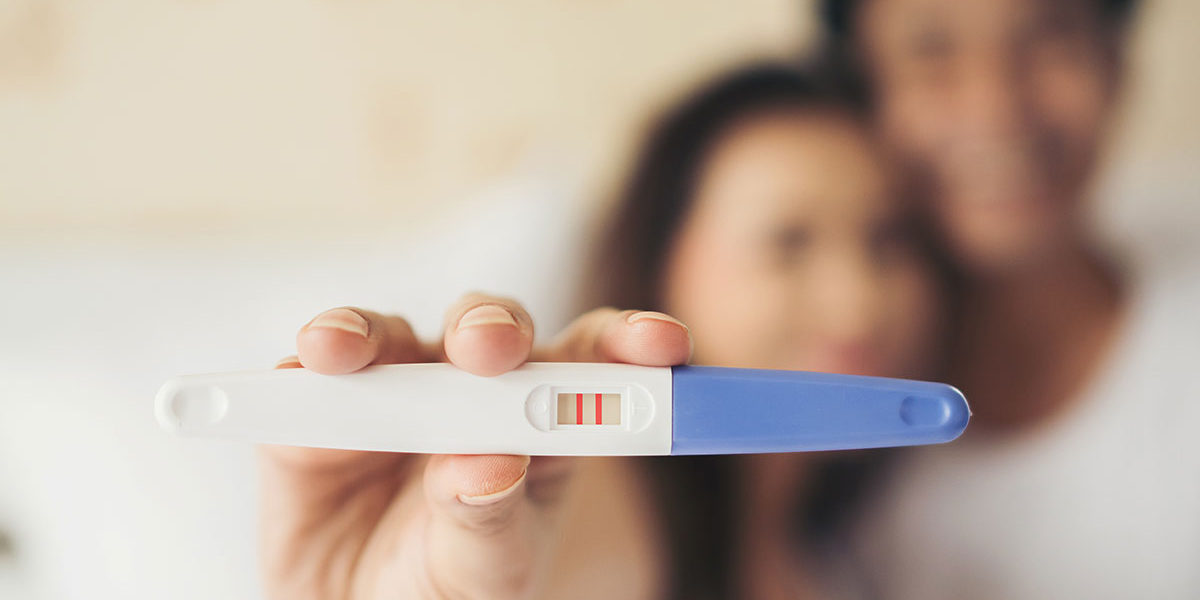 Obvious first sign of pregnancy. If you menstruate regularly and if you don’t get your period on time, this can indicate pregnancy. However, a missed period doesn’t always mean that you are pregnant. Sometimes, in some women, periods may get delayed by a few days. You need to combine this with other symptoms to be sure if you are not using a home pregnancy test kit.

A little background on why women get periods – Female body has an organ called ‘Uterus’ which is the womb where the baby grows. During the middle of the menstrual cycle, the ovaries release an egg and it stays either in the fallopian tube or in the uterus for a period of 24 hours. If that egg meets with a sperm, it can get fertilised. Note that, we are saying, it ‘can’ not ‘will’. In the meantime, from day 1 after periods, a lining starts forming inside the uterus, called the endometrial layer. This keeps growing in thickness until the end of the cycle. If the egg is not fertilised, it is absorbed by the body and at the end of the menstrual cycle, the endometrial layer is shed in the form of blood clots during periods. If the egg released is fertilised, it plants itself in the endometrial layer and starts growing into a baby. Now, the endometrial layer should not be shed, so there won’t be any periods. Body intelligently adjusts the levels of hormones so that periods are not triggered.

Swollen breast that is tender to touch

Breast tissues get enlarged and often breasts will be tender to touch. This condition of swollen breasts will be similar to that of what you see before your periods start. The areola (the darker area around the nipple) may darken further. Changes in breast may be felt in as little as 10 days after fertilisation of the egg happens. This is an indication that your body is getting itself for the baby.

Feeling nauseated and vomiting start from 2nd or 3rd week after conception. This is believed to be due to the changes of hormone levels in the body. Nausea and vomiting doesn’t necessarily happen in the morning but in the initial days, you may see it happening in the morning. Later, you may vomit at any time of the day. Women are advised (some feel like) to eat sour fruits or foods at this time.

Feeling dizzy, fatigued and the need to take more rest

More than usual, your body may feel fatigued and may tell you to rest more often than usual. This happens during the first trimester and your sleep cycle should become normal from 2nd trimester of pregnancy.

If you observe, by the time you miss your period, you may be urinating more frequently than normal. This may not happen for everyone. In some women, frequent urination may start from the 6th week of pregnancy. This is due to the increased levels of hCG (Human Chorionic Gonadotropin) hormone which is produced by the placenta. This signals the body not to menstruate and to thicken the uterus lining (endometrial layer) so that the uterus can hold the growing foetus.

If you are in the habit of measuring your body temperature after you wake up in the morning, you will notice that it is usually higher during the middle of your menstrual cycle. The temperature of the body goes up a little when the egg is released and as the cycle terminates, temperature comes down to normal.

However, if the egg is fertilised, the temperature of your body doesn’t drop by the time you expect your period. It remains a little higher.

One other early sign of pregnancy is melasma or chloasma. The skin on the forehead, in the moustache region and the cheeks may become darker than the surrounding skin. This is more often seen in brown or darker skinned women. Some white women may see little redness on their cheeks and forehead.

As soon as the egg fertilises, it triggers a rapid change in hormone levels in the body. The body should not menstruate, it has to prepare the uterus to hold the foetus and then supply the foetus with mother’s energy as it implants itself into the uterus lining etc. During this process, there can be wild mood swings and headaches until the hormone levels normalise or the body gets used to the new levels. The altered levels of hormones may also lead to constipation.

You can terminate your pregnancy within 12 weeks after conceiving. This is legal in India and you don’t anyone’s permission/consent if you are over 18 years of age. Delaying pregnancy termination may involve employing invasive procedures. (Refer to different types of abortion to know more.) We suggest, if you don’t want to keep you pregnancy, be quicker to make a decision and see a good abortion specialist near you.

Every woman has the right to abortion – Supreme Court of India
September 29, 2022

Safe period to have sex and avoid pregnancy
September 18, 2022

Types of abortions – what you need to know before going get your baby aborted
August 14, 2022